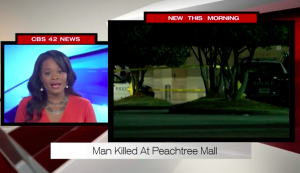 A shooting inside the Peachtree Mall in Columbus reportedly claimed the life of 24-year-old Anthony Meredith Saturday night, March 26, 2016.

According to CBS 42 News, a gunman apparently opened fire at the mall at some point close to 8:00pm.

“We’re sitting down in the food court eating right at the front of the food court. Heard about three gunshots, pow pow. Then, we heard about nine more, pow pow pow pow. After that everybody took off running….,” a witness described the scene to media.

Police have not yet identified a suspect in the shooting, presumably leaving mall patrons once again concerned for their safety. This is apparently the second shooting to occur at the Peachtree Mall this month. “A 16-year-old girl was shot and injured March 4,” CBS 42 reports.

Shopping mall patrons have a right to feel safe and secure while on the premises. Given the recent history of violence on property, The Murray Law Firm questions the level of security provided to those in the mall where this senseless incident took place, and whether this tragedy may have been prevented.

Generally, business owners and operators are required to protect all patrons legally on the premises from any foreseeable harm. Should the facts of this matter reveal that the mall owner or operator failed to provide adequate security to protect those on its premises, the family of Anthony Meredith may seek justice and elect to pursue a legal claim for his wrongful death.

Given the complexities of pursuing a negligent security case, it is imperative that the victim’s family retain an experienced attorney who can ensure the preservation of any and all evidence that may support such a claim.  Based upon its prior successful experience in handling security negligence claims in Georgia, The Murray Law Firm suggests that photographs and a thorough, unbiased inspection of the property will need to be performed immediately, before any evidence may be repaired, damaged or destroyed.