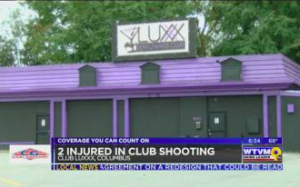 According to WTVM News 9, gunfire erupted at the Luxxx Gentleman’s Club on Victory Drive, around 2:30am, striking William Haines in the neck and back and Rashad Haines in the neck, armpit and back. Both victims were transported to the hospital with injuries. Initial media reports indicate William Haines has since been released. Rashad Haines was last listed in “unsatisfactory condition.”

Police have not yet identified a suspect or motive in the shooting.

According to reports, just several days after the September 26, 2015 shooting, “[t]he Columbus Police Department responded to [another] shooting at Luxxx Gentleman’s Club on Victory Dr…[t]his is the second shooting in less than a week to happen at Luxxx Gentleman’s Club.”  As police continue to search for suspects, and given the numerous occurrences of reported violence, The Murray Law Firm is questioning whether a potential club security lapse may also hold responsibility in this horrific assault.

By law, nightclub owners are required to protect all patrons legally on the premises from any foreseeable harm.  Should the facts of this matter reveal that the owner or management of this establishment failed to provide adequate security, William and Rashad Haines may elect to pursue a legal claim for their injuries. Under such a claim the victims may be entitled to substantial monetary compensation. Based upon its prior experience in handling negligent security cases in Georgia, The Murray Law Firm suggests that photographs and a thorough, unbiased inspection of the property will need to be performed immediately, before any evidence may be repaired, damaged or destroyed.

The Murray Law Firm has recovered millions of dollars for victims of unsafe properties in Georgia, and recently obtained a $29.25 million dollar verdict for one of our Clients.