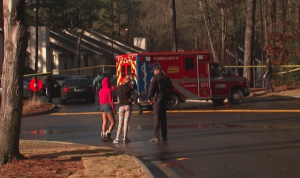 A 23-year-old young man was reportedly shot and killed by intruders upon returning to his TreeCrest Parkway apartment home in Decatur Saturday morning, December 26, 2015.  AJC.com has identified the apartments as “the East Perimeter Pointe Apartments.”

According to CBS 46, the young victim and his mother entered his apartment Saturday morning and discovered an intruder hiding in the closet. The suspect apparently began shooting at both victims, who tried to flee.

Per media reports, the family had returned to the apartment to make a list of stolen items following a robbery and assault reported by his roommate several hours prior. It is unclear whether the second intruder was involved in the earlier attack and how he gained entry to the robbery crime scene.

A neighbor apparently told CBS 46, “there was a shootout in the parking lot” only one day prior to this incident.

Apartment residents have a right to feel safe and secure while on property. Given the reported history of violence on property, The Murray Law Firm is questioning whether this tragedy may have been prevented and the level of security provided to residents of the apartment complex.

By law, apartment owners are required to protect all residents and guests legally on the premises from any foreseeable harm.  Should the facts of this matter reveal that the apartment complex owner or management company failed to provide adequate security, the family of the young victim may elect to seek justice and pursue a legal claim for his wrongful death.

Based upon its extensive and successful experience in handling negligent security cases against apartment complexes in Georgia, The Murray Law Firm suggests that photographs and a thorough, unbiased inspection of the apartment and property will need to be performed immediately, before any evidence may be repaired, damaged or destroyed.