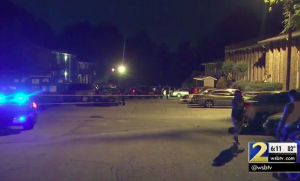 Could This Tragic Atlanta Apartment Shooting Have Been Prevented?

According to the AJC, the shooting occurred “in an apartment parking lot…in the 2000 block of Bent Creek Way.” WSB-TV 2 reports, Mr. Benton was heroically attempting to stop a fight involving his coworker when the dispute escalated into gunfire. Tragically, Mr. Benton succumbed to fatal injuries at the scene.

A second victim was apparently transported to the hospital with multiple gunshot wounds to the legs. His identity and current condition have not been released.

By law, property owners in Georgia are required to protect all those legally on the premises from any foreseeable harm.  Should the facts of this matter reveal that the apartment complex owner or management failed to provide adequate security, the family of Deante Benton may seek justice and elect to pursue legal claims for his wrongful death. Additionally, the other victim of this unconscionable shooting may also pursue legal claims for his injuries.