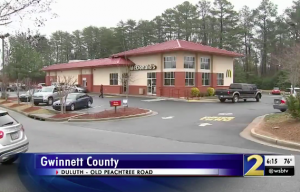 Could this violent robbery-shooting have been prevented?

According to 11 Alive, Mr. Rosas and his girlfriend, Tia Tucker, “were waiting in the McDonald’s drive-thru” when an armed suspect approached their vehicle, “demanding the couple hand over everything they had.” WSB-TV 2 reports, the suspect opened fire, striking Mr. Rosas in the leg and abdomen before fleeing the scene. He was transported to the hospital in “critical condition.” Thankfully, Ms. Tucker was physically unharmed. She told WSB-TV her boyfriend’s quick reaction saved her life.

Did negligent security contribute to this Duluth restaurant shooting? We represent individuals and families in Georgia who have suffered a tragic loss or injury as a consequence of negligent property security, and we have recovered tens of millions of dollars for our Clients. Read Our Legal Take to find out if the victim’s family may have legal avenues for justice and claims for substantial compensation in Georgia, or call now for a free consultation with out legal team: 404.842.1600.

Restaurant patrons have a right to feel safe and secure while on the premises. The Murray Law Firm questions the level of security provided to those at the property and whether this shooting may have been prevented.

By law, property owners in Georgia are required to protect all those legally on the premises from any foreseeable harm.  Should the facts of this matter reveal that the restaurant owner or management failed to provide adequate security, Juan Rosas may seek justice and elect to pursue legal claims for his injuries.