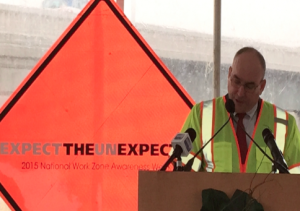 The Department of Transportation has released a new work zone safety campaign, urging drivers to “expect the unexpected.”

The new campaign launches during National Work Zone Awareness week and reminds drivers that work zones may change frequently from one day to the next, posing risks for both motorists and work zone employees if drivers are distracted or not paying attention.

Since 1973, 57 Georgia DOT employees have died in work zones, but motorists and their passengers are actually more likely to be killed or injured in work zones, according to a news release.

According to the Federal Highway Administration, in 2013 there were 579 work zone traffic-related fatalities, 29,000 work zone injuries and 105 worker fatalities. All of the categories were decreases from the previous year.

“While we are pleased that we have not lost a GDOT employee in a work zone related crash this past year, the loss of 20 lives is 20 too many,” Commissioner Russell McMurray said. “I implore the public to be mindful of our workers and to pay strict attention when driving, not just today, but every day, especially in work zones.”

When going through work zones, drivers are expected to remain alert, minimize distractions, not tailgate or speed, pay attention to signs and obey road crew flaggers.

The Murray Law Firm works tirelessly for victims and families devastated by work zone accidents and we offer our legal expertise, if needed. Anyone seeking further information or legal representation is encouraged to contact us at 888.842.1616. Consultations are free and confidential.