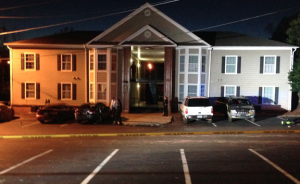 Apartment residents and community leaders are calling for an end to apartment gun violence following the shooting of a four-year-old boy outside the Highlands of East Atlanta apartment complex Saturday, December 5, 2015.

According to CBS 46 News, the young child “was outside riding a Big Wheel when he was shot.” The gunman was apparently aiming for two “intended targets” when the little boy was struck in the crossfire. The young victim was transported to the hospital in critical condition and, thankfully, “later upgraded to stable condition.”

Gunfire is apparently not uncommon in the area surrounding the apartment complex. A resident who was reportedly outside with his own children when the young boy was struck told media “he hears gunshots at least every other day.”

“These are just not bang, pow,” the resident explained, “No, no it’s dozens of shots.” The resident is now calling on other community parents to “step forward as fathers and mothers and…try to stop these shootings.”

A local reverend is also looking to local apartment complexes to do their part and “invest more money in security.”  “They have to come up with it in the budget in order to just keep the people safe that live here,” the reverend told media.

Given the reported history of community violence, The Murray Law Firm is questioning whether this horrific shooting may have been prevented and the level of security provided to families living at the Highlands of East Atlanta apartment complex.

By law, apartment owners are required to protect all residents legally on the premises from any foreseeable harm.  Should the facts of this matter reveal that the apartment complex owner or management company failed to provide adequate security, the young victim and his family may elect to seek justice and pursue a legal claim for his injuries. Based upon its extensive and successful experience in handling negligent security cases against apartment complexes in Georgia, The Murray Law Firm suggests that photographs and a thorough, unbiased inspection of the apartment and property will need to be performed immediately, before any evidence may be repaired, damaged or destroyed.

The Murray Law Firm has recovered millions of dollars for victims of unsafe properties in Georgia, and recently obtained a $29.25 million dollar verdict for one of our Clients in Fulton County State Court.