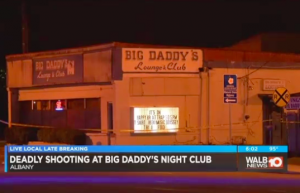 Could this tragedy have been prevented and are justice and compensation available to Aretavius Washington’s family?

Police told WALB News “an argument inside the club…spilled into the street.” Tragically, Mr. Washington succumbed to fatal injuries a the scene.

Was negligent security a factor in this Albany nightclub shooting and could this tragedy have been prevented?  Read Our Legal Take below to find out if Mr. Washington’s family may have legal avenues for justice and claims for substantial compensation in Georgia.

By law, property owners in Georgia are required to protect all those legally on the premises from any foreseeable harm.  Should the facts of this matter reveal that the nightclub or parking lot owners failed to provide adequate security, the family of Aretavius Washington may seek justice and elect to pursue legal claims for his wrongful death.

We represent our Clients on a contingency agreement, which generally means that no fees or payments are owed until and unless we recover. Anyone seeking further information or legal representation is encouraged to contact us via e-mail (click here) or by telephone at CALL NOW: 229.389.4900. Consultations are free and confidential.