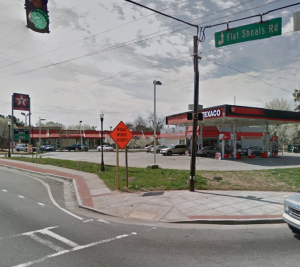 A double shooting outside a Decatur Texaco station reportedly claimed the life of an 18-year-old man and left another critically injured Saturday morning, May 29, 2015.

According to Decatur Patch, the two victims were pumping gas outside of the Texaco on Flat Shoals Road when a car pulled into the station. Multiple gunmen reportedly got out of the vehicle and opened fire outside the station, striking both victims. An 18-year-old male reportedly suffered fatal injuries during the assault. The second victim was transported to the hospital in critical condition, per media reports.

Police have not yet identified the suspects or a motive in the shooting.

News reports suggest that there has been prior criminal activity at the Decatur Texaco station, in particular a shooting in September 2014. Another shooting at this complex, less than a year later, raises grave questions over patron safety and a potential pattern of security negligence.

What security measures, such as bright lighting, surveillance cameras and a police patrol, were implemented by the gas station owner, following the previous shooting, to protect patrons and deter crime?  Did any such security precautions fail?

By law, property owners are required to protect patrons from any foreseeable harm.  Should the Texaco owner and management company have failed in this legal duty, the deceased victim’s family may elect to pursue a legal claim for his wrongful death. The injured victim may also elect to pursue a legal claim for any injuries suffered during the assault.  Under such claims, the victims may be entitled to an award of damages that could include, among other items, substantial monetary compensation for: pain and suffering; past and future medical expenses; loss of wages and future earning capacity; loss of consortium; disfigurement; and, mental anguish. If the facts of this matter warrant such a negligent security claim, it would not only be an avenue of justice for the victims and their families, but would also demand that the gas station re-evaluate security measures.  It would also serve as a grave warning to other Decatur property owners to make patron safety their first priority.

Based upon its prior experience in handling gun violence and negligent security claims in the Atlanta area, The Murray Law Firm suggests that photographs and a thorough inspection of the scene will need to be performed immediately on behalf of the victims before any evidence, such as surveillance footage, may be repaired, damaged or destroyed. It is imperative that all evidence be preserved to ensure that the victims’ best interests are protected.

The Murray Law Firm has extensive and successful experience in representing victims of security negligence in Georgia, and we offer our legal assistance to the victim in this potential claim, if desired.  Anyone seeking further information or legal representation is encouraged to contact us at 404.842.1600. Consultations are free and confidential.